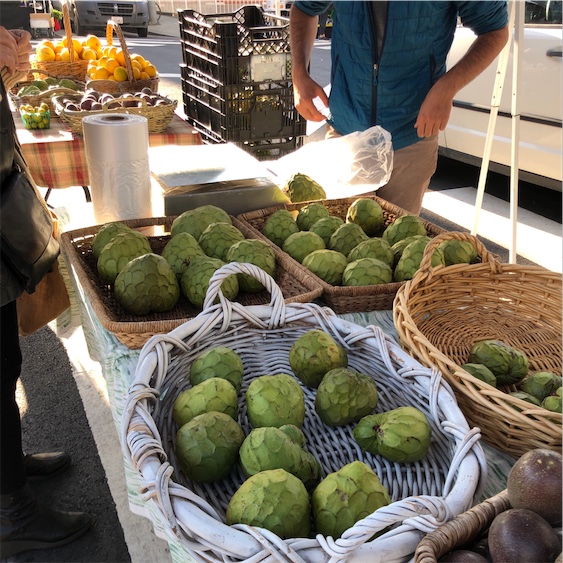 The Scarlet runner shelling bean plant produces large, stringless pods that are slightly curved into a classic bean shape. Pods are thick skinned, slightly fuzzy, and vibrant green. The pods house striking, large, kidney-shaped seeds or beans. The seeds are known for their vibrant colors and depending upon type will be varying shades of pink, purple, and lavender, often with spots and speckles of contrasting color. The beans require a longer cooking time than typical shelling beans due to their size, and the skins are substantially heartier. Once cooked the beans have a starchy to creamy texture with a savory, very nutty, almost meaty flavor. The blooms of the Scarlet runner bean are large, clustered, and most often scarlet red though some types may be white, pink or multi-colored. In addition to the seeds of the bean pods the flowers are also edible and offer a mild, bean flavor.

Scarlet runner shelling beans, botanically classified as part of Phaseolus coccineus, are an open-pollinated runner bean and member of the Fabaceae family. Unlike common beans, the plant is a perennial vine with tuberous roots, though not typically treated as such within agricultural methods and cycles. There are nearly twenty different cultivars (man-made types) of Scarlet runner bean, and all are known for the colorful seeds the pods produce. True to their name they are first and foremost known for their bright scarlet blooms, so much that in most seed catalogs they are listed under â€śornamentalâ€ť, â€śflowersâ€ť, or â€śhummingbird plantsâ€ť rather than â€śbeans.â€ť Today the Scarlet runner is mainly grown as an ornamental in the United States though it is available when in season from local farmers markets. In Europe runner types such as the Scarlet have long been a popular edible bean both whole in their immature form and when mature and shelled for their edible seeds.

Scarlet runner beans can be used when they are young as a fresh shelling bean, or they can be left to dry in their pods on the vine then shelled and used as a dried bean. Whichever form is used mature, shelled beans should first be cooked before consumption. Dried beans will benefit from soaking overnight before cooking which will make them easier to digest. Scarlet runner beans can be simmered, sautĂ©ed, braised, fried, roasted, and steamed. Cooked beans can be added to grain and bean salads or used in a summer succotash. Their large size and starchy texture make them ideal for use as substantial protein in vegetarian dishes. Scarlet runner bean pods can also be picked when very young, and the whole bean used similarly to that of romano beans or traditional green beans. The flowers of the Scarlet runner bean are also edible and make an excellent garnish or addition to salads. Scarlet runner beans work well as a pot bean and will compliment soups, chili, and stews. Other complimentary pairings include chicken, roasted and grilled white fish, pork, cilantro, cumin, corn, mushrooms, tomato, roasted garlic, oregano, thyme, melting and fresh cheeses, vinegar and olive oil. To store, keep Scarlet runner beans refrigerated and used within three to four days. Fresh beans can also be shelled then dried or frozen and saved for future use.

In the United States, most runner beans are grouped together and called, Scarlet runners with all beans having bright purple, pink and lavender internal seeds. In the United States, the Scarlet runner is a popular ornamental and grown for its large, showy blooms as a trellised canopy, as a privacy screen, or along fences and walls. The Scarlet runner is also known as a childrenâ€™s plant and is popularly grown on bean poles arranged in a tepee shape to create a tent of vines and flowers for children to play in. In Mexico, the most sought after Scarlet runner type is the Ayocote Morado which is purple with darker purple markings.

Scarlet runner beans are native to Mexico and the mountains of Central America. From there they traveled to Spain then throughout Europe and farther. When Scarlet runner beans first appeared in English gardens in the 1600s they were predominately grown as an ornamental whose blooms were known to attract butterflies and hummingbirds. Their popularity as an edible bean grew in the British Isles in the mid-1900â€™s so much so that they are listed in the 1969 Oxford Book of Food Plants as, â€śby far the most popular green bean in Britainâ€ť. As a result of their tuberous roots and cotyledons (seed leaves) that stay below ground rather than above Scarlet runner beans are more cold tolerant than most beans and can be grown at higher elevations. Plants prefer a cool to warm, not hot climate, humid conditions, and can even tolerate some degree of light frost. As a runner type the vines can grow up to twenty feet and will benefit from being grown on poles, wire or a trellis for support. When grown in ideal conditions the Scarlet runner is highly productive and will produce ample crops of beans. Similar to dahlias the roots of the Scarlet runner can be dug up at the end of a season, stored and replanted the following spring.

Recipes that include Scarlet Runner Shelling Beans. One